Campollano a cheese from the land of La Mancha made by craftsmen.
At the beginning of the 20th century, the great-grandparents of the present owners were Cattle Ranchers.
They made artisan cheeses from Cabra and Manchega sheep cheese when the animals brought them milk in the spring season.
In the middle of the century, his grandparents used to make fresh cheese that they sold to all the inhabitants of the town and neighboring towns. These were valued for their good work.

Campollano a cheese from the land of La Mancha, made by artisan

And their parents, how could it be otherwise, continued with the tradition.
Elaborating its cheeses at a more professional level in a company that was founded in 1999. Reaching position as the fifth company in Manchego cheese production in our region in 2006.

Also making fresh goat cheese, sheep cheese, cured cheese, which had its own shop.
In which you could buy cheese and other varieties, and in which we were working for 15 years. And where we have taken the experience in the artisanal production of Manchego cheese.
Our desire to search for new Cheese concepts has led us to found our current company:
FOOD MANCHEGOS, S.L, marketing the cheese under the name CAMPOLLANO. 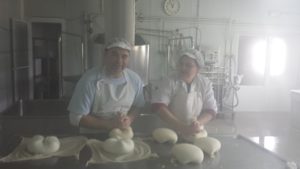 From La Mancha sheep you get the essential raw material to make what is considered the best cheese in the world.
The milk is subjected to a process of pasteurization for all those products that are consumed tender or semi-cooked.
Other milk items are destined to be made in Raw for cheeses that need other nuances, such as those cured in Romero, Al brandy and Viejos.
This cheese factory uses techniques that last over time and keeps them intact.
We continue to make cheeses of pressed paste of enzymatic coagulation.
The only thing that we have modified has been the technological and health adaptations. To get the best cheese to all the tables and with all the sanitary guarantees, complying with all the HACCP regulations dictated by the EU, and the Spanish Ministry of Health.

Once the milk is in Cuba, all the necessary ingredients are added to produce the Lactic Fermentation process, necessary to lower the pH of the 6.70 milk to that of the cheese that has a pH of 5.00, this may last for 5 years. – 6 hours.
After adding the enzymes, the natural enzymatic coagulant from the fourth stomach of lactating lambs is added, which is called Chymosin and pepsin. These two enzymatic proteins make the miracle of coagulation turning the milk into a large cheese, curd in a few minutes. It is called.

Once the curd has hardened, it is cut into small cubes, separating the liquid from the solid part.
This dough is subjected to the cooking process for a few minutes until the grain is ready to be introduced into the molds, which are adapted for pressing so that the least possible moisture remains in the cheese and follows its natural process.
Salting occurs in a mixture of Water and Salt, which is called Salmera.

There they remain in some cases up to 24 hours. The maturation takes place in Chambers with controlled environments in both temperature and humidity, so that the cheeses go dry little by little and begin to mature slowly, as my grandparents said the cheese is Time to Time.

Once the cheeses are ripened, some are presented in a traditional way to the natural or vacuum packed for better preservation, for the more conservative public.
For the more daring we elaborate the specialties that undergo different processes such as the spread of rosemary leaves on the bark so that they can take body and aromas.
Others macerándolos in Cerveza Negra long enough to catch the bouquet so peculiar to this new product, and so with all the specialties that we elaborate.
In the present we continue with the research process in which we will find new ways to enjoy this very Spanish product, bringing new approaches never before seen.

The project has specialized personnel, trained and with extensive experience in the dairy sector.

Consumers in an increasingly competitive market that produce a wide variety of cheeses.

The cheese factory is located in the heart of Castilla La Mancha. Close to the capital of Ciudad Real, specifically in the town of Poblete.
An area with a special richness in its pastures. Because it is surrounded by small mountains and a plain near the Guadiana river.

It gives you the opportunity to produce a milk with great nutritional value, which is essential to produce exceptional cured cheeses in unique flavors and aromas.

These cheeses are being highly valued in their entirety.
But in particular, says Luis Javier Muñoz, General Director of the Cheese Factory:
“Because each specialty has a different personality and nuances”.
They make the consumer accept them very well and congratulate us for the great quality they have.

It is one of the challenges of the company, is to reach out to Spanish and international consumers all this range of cheese specialties that leave no one indifferent.
The spot is located in a strategic place for the breeding of the La Mancha sheep.

Thanks to the climate and the terrain of this region we can manufacture the Manchego cheeses, known all over the world.

Our fundamental objective, Luis Javier Muñoz tells us, is to give the best of our cheese knowledge.
That everyone can enjoy them, in the best and only way, tasting the cheese … and feeling the same as we feel: Passion for Cheese. This is our personal challenge, to transmit these values ​​through all means that are within our reach.
From its variety of
• SHEEP CHEESE WITH TRUFFLE: for my spectacular of the best I’ve tasted.
• ARTISAN SHEEP CHEESE,
• SEMICURADO OF RAW MILK,
• CURED OF SHEEP.
• RAW GOAT AL or PEPPER, which are other Manchego delicacies.