Canned and traditional preserves: Canned Serrats.  Traditional and artisan preserves have their own name, Conservas Serrats.

Without hesitation, within the companies that today make up the Basque canning sector and the Biscay in particular, there are many of proven historical tradition.

If we briefly review the evolution of these companies with a greater historical tradition, it seems necessary to address the issue through Bermeo (Biscayan municipality of the Busturialdea region), without a doubt the center of greatest concentration of resources of this nature in the past. 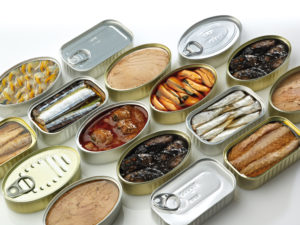 Perhaps the oldest is the one founded by José Serrats in 1890, a Catalan entrepreneur, pioneer in canning with an “appert” system, which was installed near the port of Bermeo.

Initially dedicated to the salted and semi-preserved anchovy, it was progressively diversifying its products, covering many types of fish, all of Cantabrian origin.

For this, it extended its establishments to Elantxobe (Vizcaya), Pasajes (Guipúzcoa), Asturias and Galicia. For a while, he had his own supply fleet.

But this activity was subsequently abandoned to devote itself entirely to the industrialization of canned fish.

Since the beginning of the 20th century, more than half of its production has been exported under the trade names of “Serrats” and “La Pescadora”.

Its markets were initially French and South American, while today it is directed to much of Europe and North America.

History of Canned Serrats: their containers

The wooden barrel was originally the most used container for salting and fish marinades.

Subsequently, at the beginning of the 20th century, the best knowledge of the Appert sterilization procedure allowed the use of hermetic tin foil containers.

Initially they were large cans due to the difficulty of achieving a good seal.

In the 1920s, smaller cans were introduced for household consumption.

Finally, in the 80s, when the glass jar was launched for this type of canning.

Throughout all these years, the production process has varied very little. This company has perfected its technique with a view to achieving greater quality, while maintaining respect for tradition.

Its preserves continue to be elaborated following a demanding and meticulous process similar to that of yesteryear. These techniques prevent the fish from deteriorating.

For the elaboration of all our “Canned Serrats”, we demand fish that have been caught respecting the traditional fishing gear.

The capture of the North Bonito goes back several centuries, when the boats of the Cantabrian ports were made to the sea using small rowing boats and sailing.

They fished with the art of trolling or fishing (fishing techniques with hook).
Traditionally this has been the fishing style most used by fishermen in northern Spain, until the call with live bait broke out in the middle of this century.

While Galician and Asturian fleets fish primarily with the trolling technique, those of the Basque Country and Cantabria use live bait.

They are two traditional arts that use the cane and the hook. This means that the Bonito del Norte is fished one by one, allowing to select those best quality specimens.

Also, these techniques do not involve accidental catches of other species or deteriorate the seabed, unlike those that are not selective.

The fishing of the North Bonito is carried out in the coast from June to October, when the specimen is at its optimum point to be caught and consumed.

In these dates, the boats go to the Bay of Biscay, where the most important fishing center of the North Bonito is concentrated.

It is the oldest and used by most of the Basque fleet. This is how it works: tuna vessels display long “hangers” with hooks on both sides (they are usually small plastic pulpits).

Tunas follow the trail of camouflaged baits, and voraciously bite the hook. They are hoisted on board by hand or with reels. 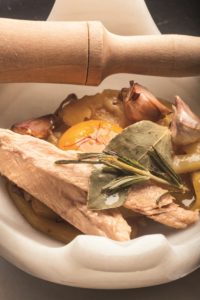 Catches are higher, but require more crew.
The boats must first fish for the anchovy or green that they will use as bait, and keep them alive in the seawater nurseries they carry.

After locating hours or days later the bank of Bonito, the ship is placed on top of it.
The sailors then “massify” the sea by throwing the live bait by the ship, while directing strong jets of water to the same site so that it seems that the water “boils” by the amount of anchovies or green.

It also serves to hide the fishermen who throw at the same time the rods with hooked anchovies. The beautiful ones excited by the food, rise to the surface throwing themselves on the live fish or hooks.

Once captured, they are finished with an accurate blow of cocoa or “matxapeta” and stored in the cellar between layers of ice waiting to be quickly landed in the port.