Clunia Wineries: the aroma of penetrating wines. This winery with 20 years old, because it was born in the late 90’s was born with the idea of ​​responding to an oenological project. A dream and a need to make wines with the power of the extreme, without additions.

Some wines from a land with centuries of experience, an arid land, lasts for its structure, for its height and for the climate that bathes it.

In these extreme conditions, the desire of this winery to produce wines that today are a palpable and tasty reality to taste was found. 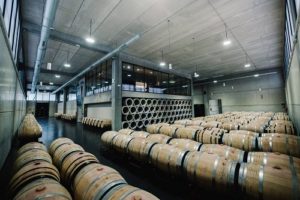 The vineyards of the CLUNIA winery have a peculiarity and they are located between 900 and 1,100 meters high. In the province of Burgos, in the Community of Castilla y León.

In these highlands, stony and arisca, centuries ago great civilizations found a place to settle and grow.

CLUNIA, is a winery that belongs to the Prince of Viana group and is born from a dream: to produce wines of the highest quality and strong character in a hostile climate.

Wines of a land with centuries of experience, an arid and hard land.

The vineyards of this winery began to be planted in the 90s when very few believed in the potential of this unique terroir located at around 1,000 meters above sea level.

Although the property has approximately 70 hectares in total, not all have been planted, as these winemakers indicate “the best way to get to know such a different land is to give it time, not to hurry.”

Today, they cultivate only 20 hectares of Tempranillo, Syrah, Albillo, and Malbec, although the incorporation of new plantations is planned, which will give a final figure of 32 hectares.

All this done with calm and patience, with great dedication to the land and low yield, as evidenced by its low production of 42,000 annual bottles among the three wines of Clunia.

At a high altitude, and surrounded by mountains that send their winds over the Plateau, the vineyards of this winery strive to survive the inclement weather.

To the hard summers, and the no less extreme winters, to the marked contrasts of temperature between day and night.

Rooted in a limestone soil, with good drainage and presence of clays, sand, and limestone rocks that vary according to the farm. The vines resist the severe frosts of this microclimate, the icy winds and the scorching heat, seeking their sustenance in the bowels of the earth.

And so, when autumn comes and the end of the ripening period, the grapes reflect its history. The effort of the vineyard that saw them born, giving rise to wines of great aromatic concentration, freshness and structure. Elegant, full-bodied wines and ripe tannins.

Fable of an invasion farm. 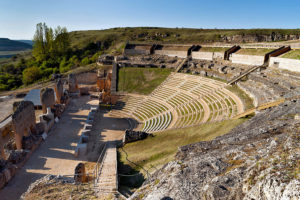 In the vineyard of this winery, the plow discovers the chronicle of another time. Coins and other vestiges of the Roman settlement that once inhabited these lands where the vineyards grow today.

It is harvested in small baskets, as more than two centuries ago in these same lands of Burgos.

In both places there were Celtiberian settlements on which the Romans later built the city state of Clunia in Alto de Castro.

Convent capital in the province of Tarraconense, which Emperor Galba called Colonia Clunia Sulpicia. He played a key role in the romanization of northern Spain and in history.

It is estimated that its population became about 32,000 inhabitants, in Roman Hispania.

The nature of the earth

The splendor of the Roman colony is still visible in the mosaics and ruins of the forum.

Shops, houses, and Roman amphitheater that can be visited and from which some of Clunia’s vineyards and our small winery are perceived.

From the Alto de Castro, one realizes that the great value of this land is nature in its purest and most primitive state.

The view is lost in a wide horizon of fields and clouds. Without hardly distinguishing populations or the hand of man except in the fields of cereal and vineyard.

Also, in Coruña del Conde, with its castle, Roman bridge and small churches, in the nearby Peñaranda de Duero. With its 16th-century palaces and its watchtower, as well as in Aranda de Duero, just 20 minutes away. The traveler can see centuries of history and rich typical Castilian cuisine. Clunia Wineries: the aroma of penetrating wines