Exclusive and Different Oil: Castillo de Canena. In its quest for excellence, it has launched the limited edition number XIII of its iconic First Harvest Day.
A highly anticipated product throughout the year. It was a pioneer in its category. Stands out among high-end oils for its careful production, aroma, taste and quality. 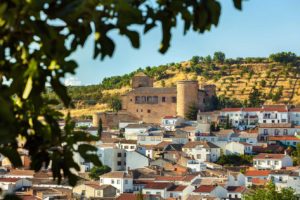 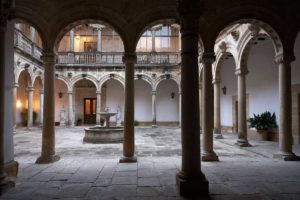 For the elaboration of its precious extra virgin oils, this oil mill in Jaén is based on precision agriculture.
In a scientific way and using the most modern technology. The company checks -in real time- the physiological situation of its olive trees and their different needs during all seasons.
The agriculture of precision, allows them to determine the most suitable day to start the harvest of each varietal with accuracy. 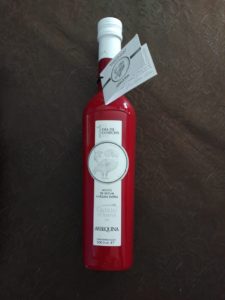 As in every edition, a personality linked to culture, art, sports or science – and a lover of olive oil – has been commissioned to design the label of its unique cherry-colored bottles.
To this unique project have already been added, in previous editions, different personalities such as:
Sara Navarro, Enrique Ponce, Joaquín Berao, Ainhoa ​​Arteta, Manolo Valdés, Pau Gasol, Alejandro Sanz, Fernando Alonso, Roberto Verino, Raphael, Alex de la Iglesia, Sara Baras.
On this occasion, the writer Juan Eslava Galán has created the new label.

For the first time in the thirteen years of the First Harvest Day, it will have a different design for the Picual and Arbequina varieties.
The winner of the Planeta Prize in 1987 has represented in the new labels two Roman coins of the Imperial Hispania, embossed in relief.
For the First Picual Harvest Day it has included the bust of the Emperor Hadrian.
And for the first day of harvest of the Arbequina variety, he has selected the figure of the owl of the goddess Athena. Known in Roman culture as Minerva, next to an olive branch.

“From time immemorial the First Day of Harvest is the object of special celebration in the Mediterranean world of the olive tree.
On this sacred day the Greeks consecrated the harvest to Athena. Goddess of oil and wisdom, and with the olives gathered by the merry pilgrims, they made a first grinding.
The oil was consecrated to the deity and was consumed both in the lamps of his temple, and in the ritual feast of his devotees.
That memory has been transmitted throughout the various cultures that have exalted the oil. And it comes to us with the fervor and the celebration of its origin “, explained the writer.
Juan Eslava Galán, grandson and son of olive growers, was born and lived his first years in an oil mill in Arjona (Jaén).

In his copious literary production, which covers eighty books of diverse themes, three essays are dedicated to the world of olive and oil, among which “A garden among olive trees” written in 2004.
Winner of the Planeta Prize in 1987 with his work “En busca del unicornio”.
He has also received other outstanding awards, such as the Ateneo de Sevilla (1991), Fernando Lara (1998) and the Andalusian Critics Award (1998).
Eslava Galán is Silver Medal of Andalusia and Counselor of the Institute of Giennenses Studies; and his works have been translated into several European languages. 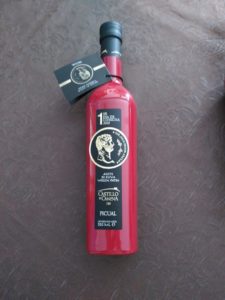 The design by the writer Juan Eslava of the XIII of the First Harvest Day, joins the success obtained in the last edition of the prestigious guide Flos Olei, internationally recognized.
The Flos Olei 2019 guide has just chosen, for the seventh consecutive year, the extra virgin olive oils of Castillo de Canena as the best in the world by giving them the highest score (99/99 points).
An achievement that positions the extra virgin Castillo de Canena oils among the world’s top 20.
First Harvest Day is the excellent result of a year’s effort by the farmer. A tribute to the mystique of the first juices obtained from the harvest with all its magic and joy.

“Only someone capable of perceiving the magic and beauty of the olive tree and its surroundings, and understanding the effort and dedication that the harvester makes every year to achieve the most fragrant, balanced and complex juices, is capable of capturing the bare space from a label the synthesis of all the emotions and passions that emanate from that special day of harvesting the first olives of the harvest, “said Rosa Vañó, Marketing and Commercial Director of Castillo de Canena.
According to Rosa Vañó, “since the concept of the First Harvest Day took shape in 2006, we have always tried to ensure that the person we entrusted with designing the label of this special bottle shared the same values ​​of excellence, perseverance and effort for work well done.
Juan Eslava Galán is a grandson and son of olive farmers; He also loves history and has written a lot about it.

Castillo de Canena takes great care in the process of selecting the best olives from the arbequina and picual varietals, and picks them at the optimum moment of maturation.
“This year has been especially complicated. On the one hand, there has been a marked delay in the state of maturation of the fruits. On the other hand, the precipitations collected from the beginning of the month of October have made the collection difficult. ” Francisco Vañó, general director of Castillo de Canena, said that:
“In addition, it has been necessary to wait patiently until reaching a phenological stage of the fruits appropriate to obtain excellent juices”.

The First Picual Day is a fragrant oil of intense green color with a high concentration of chlorophylls and a sensory profile quite harmonious despite having a vigorous fruity.
It has a great complexity and marked vegetable notes: green tomato, artichoke, green almond, banana skin and breva stem.
These descriptors prevail against a pleasant spiciness, gently perceptible in the throat, a slight bitterness and discreet astringency.
It is a velvety and long juice in the mouth with a minty aftertaste and aromatic herbs of the field.

The First Arbequino Day is a light green and bright oil with golden flashes.
Organoleptic profile very proportionate, elegant, sweet, friendly and harmonious.
It presents a great diversity of vegetable aromas, especially fresh grass, green almond and fruit salad, prevailing – in this last descriptor – the green apple and the pear.
It also highlights its fluidity and a discreet bitter and spicy in perfect harmony with the fresh and sweet notes that are present in this juice.
Almond aftertaste persistent with a light touch of pepper in throat very airy. Light final astringency.

Origin of the olives

This thirteenth edition of First Harvest Day of Castillo de Canena will be present in more than 50 countries -mainly in Europe, the United States, Latin America, Japan and Australia-, consolidating itself as one of the best extra virgin olive oils in the world, for its constant recognition since its inception.

With an olive-growing history that starts in 1780, this mill takes its name from the family castle that stands on the hill of the municipality of Canena, in the province of Jaén (Andalusia).

Located in the rich surroundings of the Guadalquivir Valley, the family castle gives its name to these extra virgin historic oils.
Next to Úbeda and Baeza, World Heritage cities and magnificent exponents of the Andalusian cultural essence.

The origin of the Castle

The Castle of Canena, was erected by the Arabs on a Roman settlement. It became the fortress of the Order of Calatrava in the Reconquest, until it was acquired in 1538 by Francisco de los Cobos, secretary of Carlos V, who transformed it into Castillo Palacio.
Sheltering the Emperor under his roof. It was declared a National Monument in 1931, to be later restored and conserved by the Vaño family.
Oil is the protagonist of a culture and an economy for 3,000 years, and Jaén, in the center.
The olive groves of this company are located in the Upper Guadalquivir Valley, between the Sierras de Cazorla and Mágina.

A future built on the past.

In Castillo de Canena the natural cycle of the tree is carefully cared for. Combining traditional wisdom, with the most advanced technology, and scrupulous respect for the environment.
All the olive trees are fully mechanized. They have installed the system of fertirrigación by dripping. C
They have the certification of “Integrated Production” (A.P.I.). That guarantee respectful practices towards the natural environment, and a rational cultivation system.
The electrical energy necessary for the exploitation of the farm is obtained from photovoltaic plants.
The pruning remains are collected to be used as biomass. There are several water stress control stations on the trees that optimize the water used.

Rosa Vaño, points us:
“We are aware that we belong to a traditional world.”
The product we dedicate to has been selling for 3,000 years
But we know that through innovation from cultivation, nuances will make our oils more exquisite, more alive.
Our work will contribute to the world, not only a product to consume, but a culture to live “.
This conviction has led them to carry out a continuous investigation.

Traveling through the oil.

The oil has no border. That is why this liquid “gold” is able to move us to the most recondite places. Making a gastronomic journey around the world … and without moving from home!
Thanks to the Arbequina & World olive oil we can be able to lock ourselves to the other side of the planet with our palate. Bringing the most characteristic aromas and nuances to our dishes …
and best of all, we will do it through recipes as simple as delicious …