Gaudium Chamberi (Madrid)Restaurant: A kitchen with roots. In Santa Feliciana, 14, in the Chamberí neighborhood, chef Juan Carlos Peñas has his restaurant. He tells me during the talk we have before knowing his dishes that is in the kitchen by passion.
“I know that it sounds cheesy and very bad”, but I am an economist and for a long and dark period of my life my work activity was linked to the administration and finances of different companies.
During this time cooking for my family was what helped me to escape.
In 2007 he decided to change course, left his job and took a professional cooking course.
In 2008 GAUDIUM CHAMBERI opens, where he works as an assistant in the kitchen while completing his training, learning from experienced chefs. Gaudium Chamberi (Madrid)Restaurant. 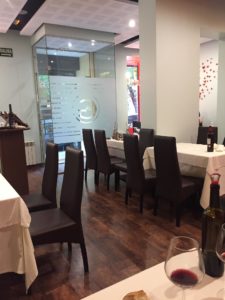 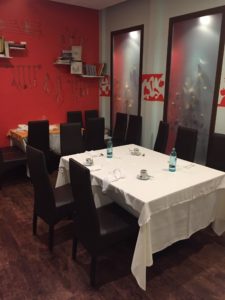 “Mothers cook well. Grandmothers cook better. Imagine how they cooked great-great-grandmothers. ”
Juan Carlos Peñas, tells us that his cuisine is based mainly on the learning he acquired from all of them through his mother fundamentally.
Taking their recipes, reading old cookbooks, searching and researching in centuries-old gastronomic libraries, I have tried to recover ancestral flavors.
Since 2013 he definitely takes the reins of the kitchen delving into the search for dishes from the roots of our culinary culture.

Selection of the Card.

As for the dishes we start with:

Sephardic root dish influenced by Persian cuisine: different cuts of broccoli, romanesco and cauliflower (stained with beet, turmeric and achiote).
Arranged on the plate forming a small autumn forest on the sauce that represents the soil of our forest.
The sauce is a mixture of tahina, Greek yogurt, garlic, lemon, mint and pomegranate molasses. The second course was the

which, as the name implies, originates in this kitchen with influence of the Maghreb cuisine: wings confit in olive oil, boneless and stuffed with a black olive puree over a lemon sauce.
The sauce is made with a bottom of bird, white wine, onion, ras el hanut and the skin of lemons in brine. The third dish was the.

Dish based on the traditional dish of Galician cuisine octopus a feira.
Roasted octopus, rolled along the tentacle mounted on a cream of potato and paprika from the side. The next dish was

Rescued from the monastic cuisine that arrives in Spain with an Italian order. Marinated pork tenderloin that is marked on the plate. It is finished in the oven together with the potato, covered with a saffron sauce and fresh thyme, pure cocoa powder and roasted almonds.
The penultimate dish was its traditional.

I think it doesn’t need much explanation:
simmering, resting, degreasing with saffron as the only aromatic element and served with grapes confit in red wine.

All washed down with an aging wine “EL GATO ORGULLOSO” from DO de Madrid.
Wine made from tempanillo grapes
To finish, we taste their

With muscatel wine jelly and grapes.
The desktop with family and / or friends from before made dessert. 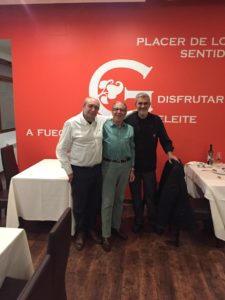 A highly recommended place to eat with friends for its environment and the quality of its products.