Granbazan winery a dream albariño. The Granbazan winery was founded in 1981, is located in the Salnés Valley, in the heart of the Rías Baixas (Galicia).
Upon entering you find a beautiful neoclassical building covered with blue tile of marked Indian influence, oriented to the north, protected from the hot rays of the south and surrounded by old Albariño vineyards.
It is undoubtedly one of the first and most beautiful châteaux of Galicia, where the noble materials merge with the landscape and the architecture with the proximity of the vineyards offer an unbeatable environment. 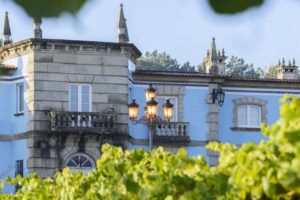 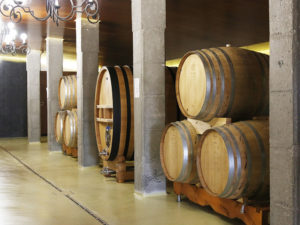 The Winery was born in these Galician lands of the Rias Baixas, center of the best Albariños, more than 35 years ago. From the hands of an ambitious wine project whose objective was to achieve wines capable of reliably containing the privileged climatic conditions that took place in those lands. They resulted in a unique Albariño wine in the world.
At that time, this historic winery starred in the most important agroindustrial revolution in the history of Galicia. He is currently a reference in R + D + I in the field of viticulture and oenology.

The pearl of the winery

The TREMOEDO plantation is a reference in the Rías Baixas Denomination of Origin; just 3 km from Cambados. It is a fantasy destination to enjoy the habitat, learn about the viticulture of the area and taste the full range of wines of this emblematic Galician winery.
La Finca is the place around which almost all the activities of the winery are developed. From the vineyard through the elaborations, storage, distribution, events and wine tourism, among others.
This beautiful building, making a nod to the Galician Indian houses. The winery, that this side of neo classical style, is semi-buried and oriented to the north, maintaining constant and fresh temperatures throughout the year.
In the kingdom of Galicia, Albariño wine was already a myth thanks to the song of the poets, as well as to the thirst and faith of the Cambodians. 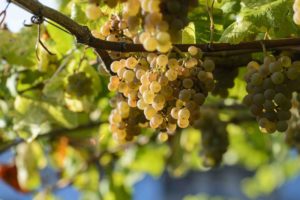 Wines made from Albariña grapes were highly valued and only drank on special occasions.
Its consumption and distribution was an obscurantist adventure in need of guidance and recommendation.
The bottles lacked labels and the small family wineries, despite their efforts, did not have the means or knowledge to offer reliable and stable wines.

This winery has wanted to maintain the tradition, but in turn has opted for modernity, and this mixture has given very positive results that can be seen in its elaborate wines.
Over the years the winemakers in this winery have developed the concept of cold pre-fermentation maceration.
The first Albariño aged in French oak barrels was pioneered.
These being the first steps for the birth of a complete range of wines with different personalities, from the same grape, the Albariña.
The Barrel Room is intended for the elaboration of our GRANBAZÁN Limousin.
In it there is a “Cemetery” where the old vintages rest, and a cellar where our sparkling project is developed.

The secret is on Earth

The plantation is located in the heart of the Salnés Valley, on a farm of 14 hectares of vineyards.
A constant in the project has been to put the maximum effort in the plantation and the care of the vineyard, selecting the best grape from the moment of the collection.
In addition to the 14 hectares around the winery, there are 3 hectares in Covas del Lobos. Place near the main location also belonging to the Pontevedra municipality of Cambados and in the middle of the Salnés region. 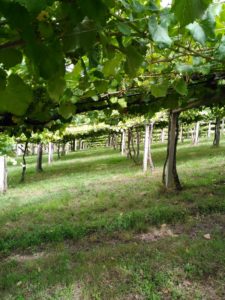 The system chosen is the “grapevine”, typical of wet and rainy areas.
In this reality, the leaves and clusters expand looking for light in a second plane parallel to the ground at 1.80 m high. What favors aeration, vineyard treatments go down and ripening is harmonious.
We capture the essence of Salnés Valley wines: 100% albariño, the fruit of the best clonal selection of Galicia and small grain, Atlantic influence. 100 m above sea level, granitic soil, orientation to the rising and deep roots.
The wine range of this winery is very complete and I was surprised that they work without pause to develop new projects. They always try to identify the potential of each micro-plot and make minimally invasive vinifications to value the terroir.