Montecillo wineries Rioja authenticity and family tradition. Montecillo has presented its new vintages and some of its novelties: such as the Montecillo Blanco Fermentado en Barrica 2016, and Montecillo Rosé 2016, both of D.O.Ca. Rioja
It will also be the perfect setting for the launch of its Limited Edition 2010. 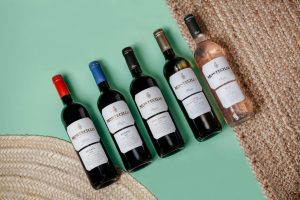 Montecillo Limited Edition 2010, has recently been awarded a Gold Bacchus and Andreas Larsson, Best Sommelier in the World (2007 ASI).
He has awarded him 90 points in his last blind tasting; is the modern expression of the eternal and authentic Rioja, the most contemporary and at the same time, the most timeless wine of Montecillo.
It is the alliance of two ancestral varieties, Tempranillo and Graciano.
To offer an extraordinary wine, of which only 34,000 numbered and autographed bottles are made by its winemaker, Mercedes García.

Mercedes García, winemaker at Bodegas Montecillo has been working on updating her wines for almost 10 years. Convinced that the virtues of the terroir and the vineyard of the Rioja Alta.
Combined with a demanding, precise and respectful viticulture, they result in honest wines with personality.
Together with his technical team he has achieved a renewed range that is part of the tradition of the brand and the region.
From taking its character, so rooted in the place, to a current, unique expression, demonstrating, in short, that the passion for the land and the experience of a centenary winery are essential to thrill the public of today.

The origin of Bodegas Montecillo is located in Fuenmayor, one of the villages with the greatest viticultural tradition in the Rioja Alta.
More than 140 years after the foundation of the first winery in 1874, Montecillo maintains a philosophy:
• respect for the vineyard
• selection of the best grape
• a coherent winemaking
• from aging in high quality oak barrels
• and a refined in the calm of its impressive drafts
where bottles of vintages go back to 1926, the same year that the Rioja Designation of Origin was created.
In the second half of the nineteenth century, a handful of passionate bet with conviction by the method of Bordeaux elaboration.
They started producing wine with the will to transcend the limits of the national market.
One of the first to do so was Don Celestino Navajas Matute,  who founded his winery in 1870.

Don Celestino demonstrated a great vision of the future: he sent his son Alejandro to study in Bordeaux.
With the passage of time, Alejandro and his brother Gregorio would create the name Sons of Celestino Navajas, with the idea of ​​continuing the work of his father.
The next generation, incarnated in José Luis Navajas -son of Alejandro-, studied oenology in Burgundy and in the Penedes.
He becomes the manager of the family winery by decisively boosting the quality and success of his wines.
Introduces innovative techniques in Rioja such as cold winemaking, so characteristic of the winery now called Montecillo.
José Luis Navajas had no offspring and decided to put the legacy of his ancestors in the best possible hands.

Thus he established a relationship with another hundred-year-old winegrowing family, Osborne, who acquired Bodegas Montecillo in 1973.
Since then, Osborne has enhanced the great virtues of the Fuenmayor winery:
• the quality,
• the tradition
• and know-how
when building new processing facilities, more spacious and functional between the villages of Fuenmayor and Navarrete.
It is the current Montecillo Winery, conceived for a careful vinification and to elaborate wines of long guard, authentic insignia of the brand.

The wine brand of the centennial winery of the Rioja Alta, Montecillo, presents a new facet anchored in more than 145 uninterrupted years dedicated to elaborate the authentic Rioja.
A change reflected in the first instance in the packaging of its classic range – Crianza, Reserva, Gran Reserva, Blanco Fermentado en Barrica and Rosé – with the aim of highlighting a century and a half of history and a unique symbolic capital in the region.
The visual identity is the result of an exhaustive deepening in the origin of the brand and in the history of two great families passionate about honoring the authenticity of Rioja:

A history of tradition with a vocation to transcend.

Montecillo intends to consolidate itself as a renewed classic.
Relying on the intrinsic values ​​of the brand, always showing its commitment to the development of an authentic Rioja.
With wines that are beyond fashion and endure over time; wines dominated by elegance and length that have captivated experts and consumers around the world.

Valeria Morado, Global Brand Manager, defines the re-launch of the flagship brand of the centenary winery as:
“a renewal with a clear objective of putting value on the historical assets of the brand, rescuing the values that make us unique and different through an almost artisan work of recovering 19th century symbols and typographies of the brand; of the mint green color that has been part of the identity of the winery for more than a century. “

The brand from La Rioja officially presented this new image during the Salon de Gourmets last May 7 in Madrid.
In addition to the classic range, visitors were able to taste the new vintages of their most recent releases:
• Montecillo Limited Edition,
• Montecillo 22 Barricas
• and Montecillo Blanco Fermentado en Barrica
which have obtained the highest recognitions by critics at international level.

The launch of the new image of the brand coincides with the reopening of its historic winery in the town of Fuenmayor, Rioja Alta.
Site that would turn it into the pioneer winery in the area. Third in establishing itself in all Rioja – and in whose underground niches still rest wines of historical vintages as old as 1926.
It also coincides with the renovation of its wine tourism facilities. Visitors can contemplate the 20,000 barrels of French and American oak that houses its underground park;
– Or the handmade bottle rack where hundreds of thousands of bottles are stacked by hand on top of each other. Resting motionless during their long upbringing.
– to the niches that house their Gran Reserva wines Special Selection
strictly produced in exceptional vintages and in extremely limited quantities.

Also, you can visit the renovated shop and tasting space.
A museum area that houses historical documents and reflects the most important landmarks of the winery since its foundation in 1870.
As well as a spectacular projection directly on the barrels under the innovative videomapping technique, a visual spectacle out of the ordinary.

accompanies the launch in:
1. national hospitality
2. and specialized stores
the new vintages of Crianza 2015, Reserva 2012 and Gran Reserva 2010.
The campaign that accompanies the new visual identity will be disseminated from May on social networks and specialized press.
In the words of Mariangel Lezama, Global Marketing Manager, this new stage:
“It accompanies the oenological excellence of the wines of the Montecillo range through the enhancement of a true and uninterrupted history through each and every one of the points of contact with the consumer of today”.