Promises with a future in the Madrid Fusion 2019 contest, are now a reality.
In this edition seven professional young chefs will compete for the 2019 Revelation Cook Award, in the XVII edition of this award.
The winner will be revealed on January 30 in the Congress auditorium. 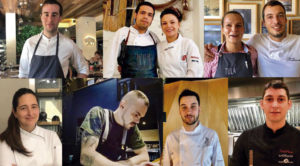 Promises with a future in the Madrid Fusión 2019 contest

A group of professionals selected by the organization after countless trips throughout Spain.
The merits will be evaluated by a large jury of specialists and food critics.
The winner, after individual and secret voting, will join the list of those who already hold this award among those listed: Carmelo Bosque, David Yárnoz, Iñigo Lavado, Ricard Camarena, Vicente Patiño, David Muñoz, Rodrigo de la Calle, Jaime Tejedor, Óscar Calleja, Jesús Segura, Iago Castrillón, Daniel Ochoa and Luis Moreno, Diego Gallegos, Javier Estévez, Jesús Moral and Nanin Pérez.
At the time, professionals of incipient trajectory, that now add numerous Michelin stars and multiple recognitions.

Fernando Alcalá is a young lawyer of 27 years who left the toga to embrace the pans.
He resigned from a brilliant legal career and the law firm where he worked in Zurich to run his own restaurant in Marbella, his hometown, where he owns a restaurant with few tables.
He is a self-taught chef who has read, traveled half the world and studied the essence of multiple cuisines.
It has the culture of a gourmet enthusiast of wines and food.
It offers a 10-course menu that changes every morning from local ingredients.
Products that he treats with a technique and creativity that he enthuses and with which he manages to reinvent himself on a daily basis. 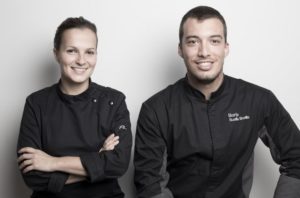 Clara Puig de la Bellacasa (30 years old) and Borja Susilla (29 years old) have been doing something more than two seasons offering a peculiar cuisine in Tula, a tiny restaurant in Jávea.
They were formed together with Marcos Morán (Casa Gerardo) and Quique Dacosta, who transmitted the spirit that accompanies the best cuisines, the sense of taste and the game of balance.
If something singles out Susilla’s work, it’s the way she treats the fish of the coast.
In alliance with local fishermen, it is slaughtered with the ikejime method, and left to mature in camera for days to refine its textures and flavors.
His kitchen is simple but very original. Successfully handles seasonal products and delves into the gastronomic habits of that corner of the Mediterranean where they have achieved a deserved success. 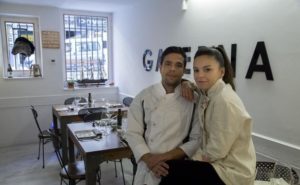 With an impudence according to their age, Rebeca Barainca from La Mancha and Jorge Asenjo from Madrid, both under 30 years old, prepare recipes presided over by daring and technical details.
Young, mestizo kitchen, with points of transgression in all its dishes.
Rooted in both the Basque recipes, which dominate after their long stays in the Basque Country, as in their respective places of origin.
A contemporary style, typical of open minds, that harmonizes local ingredients with other distant ones.
In all cases, recognizable flavors, fruit of their imagination and the passion they share.
Nothing is strange that they have risen with the silver and bronze awards in the last two competing championships of pintxos of Guipúzcoa. 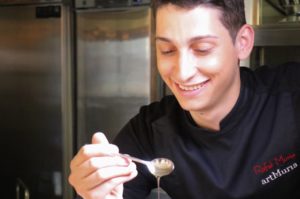 The chef Rafel Muria, 24 years old, is helped by Raymond Lupa and Gerard Virgili, aged 22 and 27, respectively.
At first glance, “children” who play haute cuisine.
He trained professionally at the Hoffman School in Barcelona.
He spent a full season with Michel Bras in Aubrac. Three years with Joël Robuchon in the Atelier of the Latin Quarter of Paris where he became the second chef.
He is a native of Perelló in the Delta del Ebro. He works in a small restaurant for 20 people at the foot of the Montsant mountain range (Tarragona).
In full mountain, its kitchen pays homage to the fish and seafood of the coast.
With the repeated presence of local products (mushrooms, truffles, eels), and under the guiding thread of the honeys of his family. 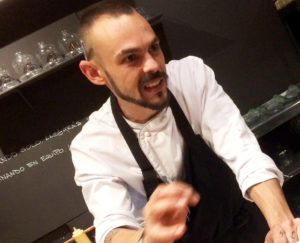 Nothing is foreseeable in this secluded bar converted into a restaurant.
Neither is the kitchen of Jorge Moreno (31 years old), who baffles and persuades with his passion, impetus and knowledge.
It is a hurricane capable of ventilating itself each service with thirty diners in the room and a single assistant in the kitchen.
He has worked with Albert Adrià in Tickets; Dani Frías at La Ereta, and Marcus Wareing at The Berkeley Hotel in London.
His self-confidence as a professional recalls the style of David Muñoz.
Enthusiastic to say enough, resort without complex to avant-garde formulas with which manages to succeed.
It approaches with the same ease traditional stews that spherifications. His proposals are complex, risky, sometimes implausible, but in the mouth they work.

The kitchen of María Gómez (31 years old) enhances the essentials without artifice.
Hit with the cooking points, measured to the millimeter, and shows a lot of hand with the aesthetics and dressings.
Peaceful and reserved, its dishes express delicacy and richness in nuances and an inner strength that conceals after a calm mood.
In its tables suggestive compositions follow in which, in broad strokes, everything combines with an innate balance and elegance.
Contemporary recipes that harmonize ingredients of Campo de Cartagena. The fish and seafood of the Mediterranean, with the fruits and vegetables that sprout on the banks of the Segura River.
In short, a great cook who dominates the rice. It brings to its dishes freshness, technique, modernity and tradition in equal parts. The landscape of your land on the plate.

A month after its inauguration, the restaurant Efímero and its cook Joaquín Serrano, aimed to become candidates for chef and local revelation with strong arguments.
With 27 years Joaquín Serrano elaborates modern dishes of academic background and French influence.
Moderately creative, lacking in effects and orientalizing temptations, possibly an unconfessed form of rebellion.
His kitchen, which does not fit between the calls of product, maintains a close dependence on the swings of the market.
Your letter, which is written by hand, changes by hours depending on the ingredients that burst in your pantry.
In short, clear ideas, well-defined dishes and, despite his youth, great knowledge of the trade.