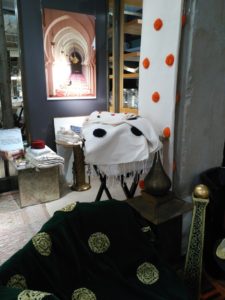 The gastronomy of Morocco with another look

Another look at Traditional Gastronomy 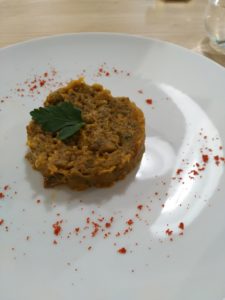 On the day of this past Thursday, a complete menu was tasted starting with a starter of AERIAL.
It takes in its preparation, a teaspoon of concentrated tomato, four cloves of garlic, and cumin.
Inside his explanations he gave us the recipe of how to prepare the LEMON CONFITADO:
Cut into sliced ​​lemon and put them in a glass jar. We put salt, olive oil and press the lemons and put it upside down the jar for a month, and wait for the process.

After this cook who speaks perfectly Castilian, since she has been in Spain for a few years, she explained how to make another typical Moroccan dish, RFISSA (REFISA).
The main ingredient is chicken, but it has a lot of species (juniper, licorice, cardamom, nutmeg, cumin, thyme, cinnamon, curry, clove, rosemary, oregano, etc …)
And finally, we had to do it with a typical Moroccan dessert: VACILA, whose main ingredients are fruit, to the taste of the consumer, in this case he put apple, pear and raspberries.

To the demonstration of this cook (owner of a catering, dedicated mainly to events and weddings), and known by her surname, RAJAA, have attended; gastronomic critics, journalists and fans of the highest gastronomic level.
The event, organized with the collaboration of the Embassy of the Kingdom of Morocco, the Tourism Office of that country, and the Craftsman’s House of Morocco, was held to gain an in-depth knowledge of Morocco’s gastronomic, cultural, literary or musical wealth.

Among the activities that have been developed include a parade of Haute Couture Caftanes by designer Albert Oitknine; a workshop on the world of perfumes and essences; In addition, there has also been a discussion on cultural festivals “Morocco is a Fiesta”.
And a talk by the writer Emma Lira, belonging to the Spanish Geographical Society about the Amazigh culture and the Berbers.
In addition, the spectacular show cooking with the “ARZAK MARROQUI” Moha.
To finish ‘Morocco with another look’ has organized, a Henna workshop.

Morocco Culture and Gastronomy in Utópica 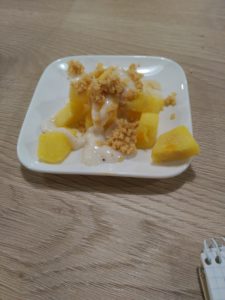 Utópica Travel Travel El Corte Inglés, in collaboration with the Embassy of the Kingdom of Morocco, the Tourism Office of that country and the Craftsman’s House of Morocco, bring to the Espacio Utópica, in Madrid, an event to learn in depth the Moroccan culture .
A celebration of this magnitude and importance has only been celebrated in Europe in the United Kingdom in “Harrods” before.
Visitors to Utopica will be greeted with a Moruno Tea ceremony accompanied by traditional pastry and live music from Oud.
Also throughout the day, and surrounded by the best Moroccan crafts, you can see 4 artisans working live: a calligrapher, a jeweler, a cabinetmaker and a weaver.
You can also enjoy the photographic exhibition. 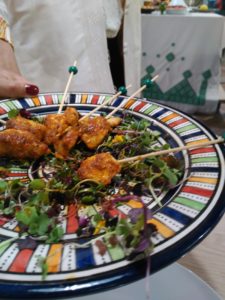 The chef Moha Fedal, and his wife Khadija, offered us a master class of their most emblematic cuisine of the Maghreb, specifically Moroccan.
Moha Fedal is a professionally trained chef at the Hospitality School of Geneva. He has gone through multiple cuisines around the world, from Europe to the United States.
This step by one and another continent has endowed him with an international vision that applies in his dishes and in the menus of his restaurants.
Moha inaugurated ten years ago, after fourteen years of experience in different hotel kitchens, Dar Moha Marrakech, in his hometown.
Probably the most luxurious restaurant in all of Marrakech.
A spacious place located in what previously would have been a riad. An impressive palace later reconverted, with garden, illuminated pool and mosaic floors. 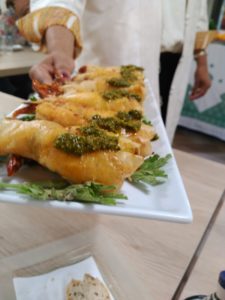 Moha Fedal offers us one of the most unique cuisines we can find. An Arabic signature cuisine in which seafood and gourmets predominate.
Moroccan cuisine has among its most traditional recipes with the famous cous-cous, made with lamb, chicken, chickpeas and vegetables. He transforms it and prepares it with foie gras or fish.
The famous chicken pastry is a reason for haute cuisine when it is made with quail, or stuffed with fish.
Also the tajine, another of the most internationally recognized dishes, is reconverted with ingredients such as ox.
Of course, it is a passionate cook of the sweet-salty combination. And it is easy to find the flavors of sugar and cinnamon in their recipes in an unusual way.
Work with local and Moroccan products. Taking care that your baby lamb supplier, provide the piece according to the Muslim way.

“Moroccan cuisine is an open book of colors and aromas whose pages cross the shared seas. Overflowing with the sensitivity of the Maghreb, in search of friendly towns, “says Moha Fedal.