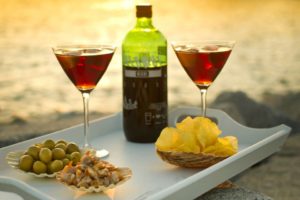 The world and the land of the vermouth.- 2nd Part

The most historic and traditional, packaged and branded. Such as Yzaguirre, Miró, Irish, Perucchi and Martínez Lacuesta, and the vast majority of those made in Spain.
This is the type or style of vermouth of our country, a kind of Italian version but a little sweeter, based on the majority, since they are coming to the market drier vermouth and with a more acid and fresh style.

There is a Galician vermouth based on Galician grape wines, mixtures. Bold botanists and sweets.
It must be remembered that wines fortified with herbs were already produced in the Cistercian monasteries, such as Armenteira in the 12th century
Expression of albariño, treixadura and mencía, generally drier and with traditional brandy.

Especially referred to the use of Pedro Ximénez wines aged in solera systems.
Dry wines are also used as fine, dry old wines of the oloroso type, sweeter as muscateles, but always sweet. 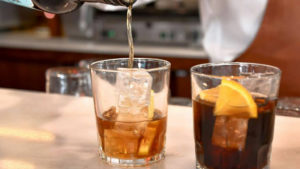 Each day they appear more in function of the grapes and the zones, from the most traditional and Mediterranean of grenache of Tarragona, of Madrid, Bierzo, Alicante, etc.
Mostly they expose and are based on grape-wine varieties; it can be said that they are monovarietal and at the same time some express an area.
But, fortunately, vermouths made from wines of one or more specific strains came – an authentic wonder to be able to taste the notes of one or another grape.
This is where the difference between the north (Galicia, Bierzo, etc.), south (Andalusia) and east and center has been created, although in style most would be the so-called Italian-Reus, darker, sweet, and so on.
Speaking of albariño, mencía, grenache, tempranillo, bobal, macabeo, xarel·lo, Pedro Ximénez, muscatel, semillon, sauvignon blanc, riesling, etc., is increasingly a way of asking and enjoying the difference between one and the other style.

The vermouth is still fashionable

In recent years the consumption of vermouth in Spain has increased by 30%, to learn more about this phenomenon, I have contacted one of the largest Spanish specialists in this drink.
This is Ester Bachs, author of a book that has become a mandatory consultation and reading for anyone who wants to delve into all the details of this appetizer: VERMUT GUIDE (2015, PLANET).
This drink has been recovering its former role as the backbone of social encounters and, currently, the offer of vermouths has not only increased, but brands have evolved and innovated.

Vermouth trends. The world and the land of vermouth.

The interest in the ancestral tradition of the aperitif has grown among lovers of vintage, but also begins to create a trend in the new generations.
Many wineries have developed their own formulas and have recovered old recipes from their area, and new vermouths have been opened for an aperitif.
With the help of this guide, the reader will know a selection of the best vermouths made in our country (with detailed descriptions and tasting notes).
Gastronomic recipes with avant-garde chefs, cocktail recipes and a list of the most representative vermouths that elaborate or are interested in craft vermouth with an identity stamp.
First Ester;

R. – The balance of recent years tells us that the vermouth sector in Spain continues to grow, both in production and sales, with annual increases in consumption.
Consumption is increasing year after year (with an increase of approximately 5%, reaching 30 M liters per year, according to ANEV …). It is consumed a lot in the HORECA channel, although also in the supermarkets we have seen how the brands and styles of vermouths increase in their lines.

What is the level of acceptance by the Spanish consumer when buying VERMUT OR VERMOUTH?

R.- The popularity of this drink among Spaniards follows the same trend, thanks to the involvement of restoration activities. More and more places called “vermuterias”, vermouth formulas and related activities such as the VADEVERMUT FAIR of Barcelona and Madrid, the “vermouth” concerts, salons, etc. emerge.
What role are the supermarkets and supermarkets playing in the sale of VERMUT O VERMOUTH?
R.- It is significant how the number of references in supermarket shelves has increased, giving access to more brands and variety of vermouth.

A few years ago you could find at most 10 brands of vermouth in the big super and now this has doubled at least with the rise of Spanish brands.

What is the moment you are living in Spain VERMUT O VERMOUTH?

R. – Everything indicates that he is living a very good second youth.
How is the foreign market developing?
R.- More and more importers are interested in the product and want to introduce it in their countries. An American market leads the interest, like the United States, who know the product well for its long tradition in cocktails, but also markets such as Canada and Australia have been very interested in Spanish vermouth.

What is the difference between VERMÚ or VERMOUTH national and that of other countries?

R.- The French, Italian and Spanish styles, for example, are different. Spanish vermouth is usually made with grapes and white varietal wines (such as macabeo or airén), and in its recipe many aromatic botanicals are used, in the order of 20 to even more than 100. Therefore, it results in a vermouth style more aromatic, soft and balanced. French, as a rule, is a dry and white vermouth. And the Italian “rosso” is more powerful, with more sweetness and bitterness more intense.

The wine vermouth essence. world and the land of vermouth.

Vermouth is a liqueur flavored with herbs, formed from neutral wine of good quality. A touch of absinthe or absinthe and other bitter and tonic species.
Of products to marinate this liquor there are hundreds, which can be combined in a thousand different ways.
In the proper mix of botanicals (roots, plants, flowers and spices) lies the key to the aromatization of good vermouth.
The oenologists of each brand usually use between 50 and 80 different ingredients to make this drink.
This makes the vermouth one of the concoctions with a wider range of nuances, tastes and smells.

The origin of vermouth

And sweeteners such as sugar and caramel, which gives it that characteristic golden color.
Although it is a drink that has been around the world, its origin is typically European.
The world and the land of vermouth. We find it in two large families: black and white. The black vermouth has its origin in Italy and is sweeter, while white, created in France, is drier and has a higher alcohol content.