What is the neck of the bottle and what is it for? The first thing we will do is define the word gollete, its meaning.
It is defined neck to the top and front of the neck. In the bottles is the narrowest part of the bottles.
In the world of wine, the neck is the top part of the bottle, usually thicker to prevent the pressure of the cork from breaking the glass bottle. 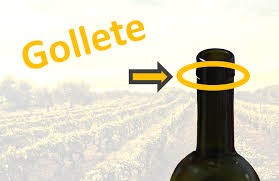 What is the neck of the bottle and what is it for?

The neck of wine bottles has two functions:
As we have said before, it is thicker to prevent the pressure of the cork from breaking the neck of the bottle.
The second is to be able to cut the capsule below the neck, thus avoiding the contact of the wine with the capsule.
We must also remember that the neck serves as a point of support when uncorking a bottle of wine. It is the part of the bottle where we support the traditional corkscrew.

Location of the neck

Currently the neck can be located in two different parts of the bottle.
The traditional location is that which leaves a little glass between the mouth of the bottle and the neck.
The second form is the one that places the neck on the very edge of the bottle. In this location we can not cut the capsule before the neck, so we have to make the cut of the capsule just below the neck.

Origin of the neck

The shape of the neck has its origin in that stage, because it was the place where the rope was held.

Parts of the wine bottle

• Head: upper area through which the wine is opened and served. This part contains a thicker contour that surrounds the mouth that is called “neck” and whose purpose is to prevent the pressure of the cork can break it.
• Neck: part on the shoulder. You can vary its length and diameter.
• Shoulders: area where the bottle begins to widen
• Body: Central part of the bottle
• Background: also known as chopped. It is the final part of the bottle