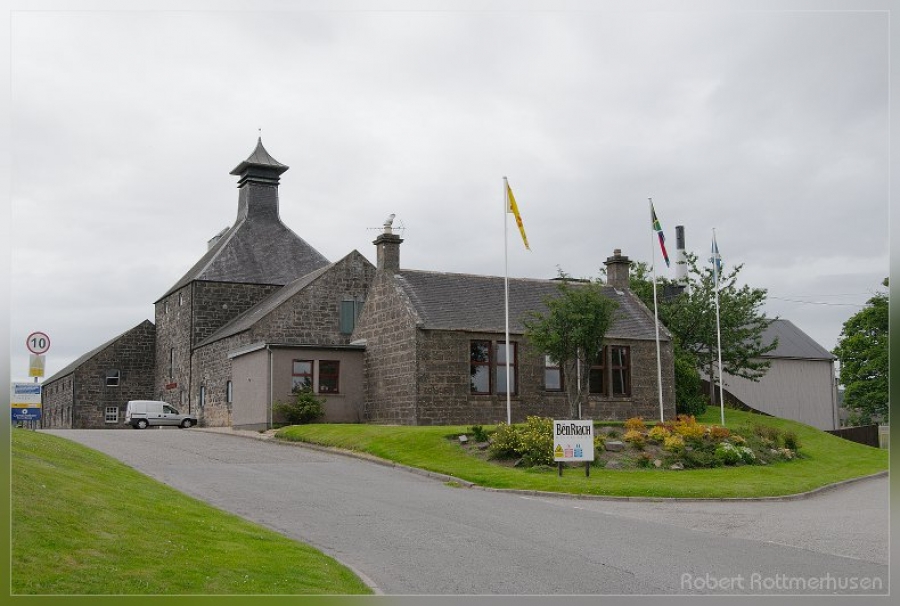 Located in the ‘Heart of Speyside’, in the North-East region of Morayshire, BenRiach displays all the traditional charm of a Speyside distillery. Built by John Duff in 1898, BenRiach draws its water from the Burnside springs located underground, deep below the distillery.

Although BenRiach started producing malt whisky back in 1898, the distillery was a victim of unfortunate timing; BenRiach was operational for just two years before the ‘Pattison crash’, in 1900, resulted in a period of hardship for the entire whisky industry, and the resultant closure of many distilleries. So, after just a couple of years of distillation, the stills at BenRiach fell silent, and remained so for sixty five long years… Under normal circumstances, this would have spelled the end for the distillery, as the buildings would surely have been demolished. However, next to BenRiach lay its sister distillery, Longmorn, which had enjoyed sporadic periods of production during BenRiach’s lengthy hiatus. The whisky makers at Longmorn continued to source some of their malted barley from the floor maltings at BenRiach, which had remained operational, and it was this alone that kept BenRiach alive during those ‘mothballed’ years. Then, in 1965, the Scotch whisky industry entered a golden era, and suddenly new distilleries were being commissioned and mothballed distilleries re-opened, including BenRiach. Production re-commenced immediately. Fast-forward to 2004, and the beginning of the most exciting period in BenRiach’s history. It was in April of that year that BenRiach became independent, having been purchased by three entrepreneurs – Billy Walker, Wayne Kieswetter and Geoff Bell. Upon acquiring the distillery, the new owners inherited an inventory of almost uninterrupted stock, with the oldest casks dating back till 1965. The vision was to establish The BenRiach as a premium, high-quality Speyside malt. The independent ownership allows the distillery to experiment with several interesting wood finishes and it continues to produce whisky from both peated and non-peated malted barley. The BenRiach portrays its own uniqueness through the particular methods and skills of the men who craft the whisky, the ingredients used, the distinctive copper stills and the high quality casks selected for maturation.