Bodegas Mauro, wines from the land with their own identity. Since 1978, Bodegas Mauro has been characterized for producing quality red wines with a vocation for aging and limited production.

Bodegas Mauro, wines from the land with their own identity

Balanced wines, opulent and sensual, that vindicate the identity of the terroir, the characteristics of the varieties and personality of the producer.
Within the Spanish wine scene, this winery produces modern wines, but with roots. Attached to tradition and with signs of their own identity that make them recognizable.

A restored 17th century mansion, a great example of popular architecture. With an underground cellar, it houses the aging and bottling ships of this winery since 1980. 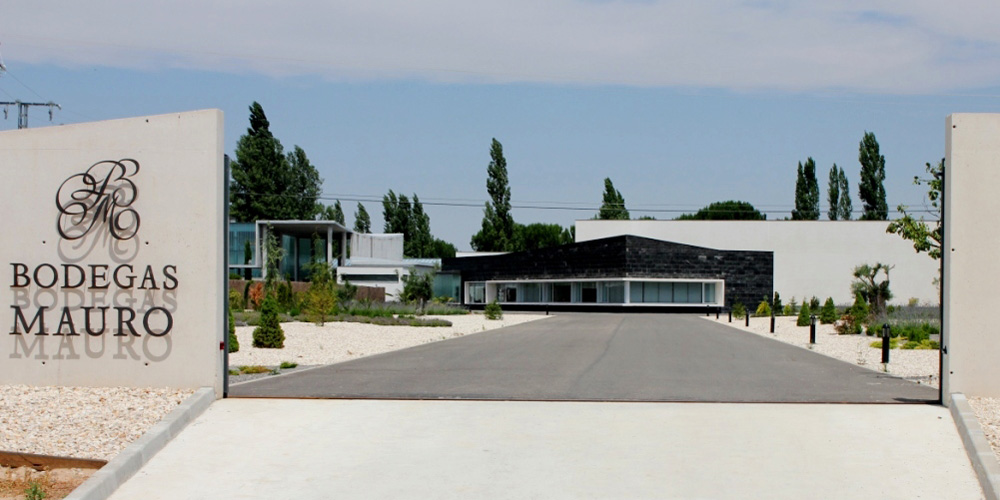 As a counterpoint, since 2004 the elaboration takes place in a modern and functional building in Tudela de Duero.

This winery is located in Tudela de Duero. Historical municipality of the province of Valladolid which is located 19 km from the capital, in the heart of the Douro Valley. In the middle course of the right bank of this great river that surrounds it in the shape of a horseshoe.
The riverside village of Tudela has a long viticultural tradition.

The reputation and history of the wines go back to 1562 when Felipe II exempts her from paying tributes for the quality of her vineyards.

In Tudela de Duero and Santibañez de Valcorba our 80 hectares of vineyards. Planted mainly with fine red and syrah, they are located on light soils, filtering, easy to work and of balanced texture, limestone or clayey-calcareous according to the plots.

Vineyard attached to the earth

The average age of the vineyard is 20 to 25 years, with yields between 3,000 and 5,000 Kg per hectare.
It is an area of ​​continental climate and Atlantic influence, with sudden thermal changes day-night.
No herbicides are used in the vineyard. The possible auxiliary fauna and the natural reserves of the vineyard are respected to the maximum.
Packed grape h3
The grapes are collected in boxes of 15 kg.  After a meticulous selection in the winery, they are transferred by gravity to 12,000 kg deposits, separating the lots by varieties, farms and production areas.

The alcoholic fermentation, with native yeasts, and the subsequent maceration is prolonged during two or three weeks depending on the vintage and the characteristics of the wine.

The barrel park is renewed 20% per year. 75%, French oak and 25% American, with drying of at least three years and extra fine grain.

The time and type of aging is marked by each wine according to the payments, the age of the vineyard and the characteristics of the vintage.

Mauro in the world

The wines produced by this Castilian-Leonese winery are present in more than 55 countries around the world.
The winery produces between 280,000 and 300,000 bottles a year of its three wines: Mauro, Mauro VS or Vendimia Seleccionada, which has a longer aging period and comes from our best vineyards in two plots.
And Terreus, from a single vineyard and that only occurs in exceptional years in that payment. 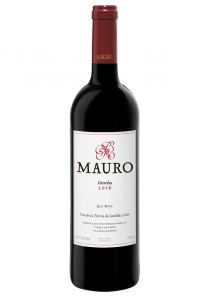 This wine is conditioned by the temperate winter and the rainy spring that caused a sprouting delay. An early summer start accelerated flowering since the end of June.
In the first days of September the plants coped well with the high temperatures thanks to the humidity in the soil and the spring water reserves.
With a more rapid maturation in this last section of the cycle, the harvest started on September 15 with smooth skins and a moderate alcohol content.

Has a fine and harmonious palate in the mouth, on the nose the aroma of black fruit, notes of cocoa and liquorice. Tasty, fresh, friendly, with a soft tannic.
This great wine was bottled in April 2018 after 15 months of aging in French and American oak barrels and fudges of different ages.

This wine with an alcohol content of 14.5º. Made with the variety of Tinta Toro one hundred percent with a production of about 95,000 bottles and 2,500 magnums.
Vineyards from which these grapes come are located in San Román de Hornija – Villaester – Morales de Toro.

The soils on which these vines rest are stony and sandy-clayey.

With which this wine was made under the D.O. Toro has had a relatively warm winter, with below-average rainfall and rapid sprouting.
Spring without frost, with flowering at the beginning of June. The veraison was completed in the first week of August. There were no average temperatures too high in that month.
As of September 8, the harvest lasted for four weeks with unbeatable weather and occasional storms that cooled the grape and had no impact on the health of the fruit.
Luminous and varied aromatic palette with predominance of black fruit, ferric notes, cocoa, licorice and aromatic herbs.

Exuberant, consistent, very tasty, with sharp but fresh tannins. It was bottled in March 2017 after spending 24 months in new and used French and American oak barrels.
A lot of matter in a wine of ample dimension. 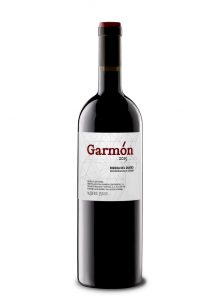 Is made with the Tempranillo grape. Variety one hundred percent of the vineyards that are from 30 to 100 years old in La Aguilera, Moradillo, Baños and Tubilla.
Soils predominantly clayey-calcareous and sandy clay, and yields between 3,000 and 4,000 kilos per hectare.
It is made with 12 days of fermentation and maceration with autochthonous yeast, daily overruns and temperatures of up to 28º. Aged for 16 months in French oak barrels.
Bottling June 2017. A total of about 46,000 bottles and 1,800 magnums have been produced.

It adds, has tended a temperate winter and spring with advance of sprouting in a very dry vintage.
An early harvest, with excellent conditions for ripening at the end of the cycle due to moderate diurnal temperatures and low nocturnal temperatures.

In a continental climate context, the collection began on September 30 in La Aguilera and ended ten days later in Tubilla.

Kind, intense wines with a great fruit load.
In tasting offers a measured maturity, offering silky and fatty tannins, appreciating in mouth a harmonious balanced between the first bribe and the last, being this one that reflects the globalization of the roundness of this wine, for me very interesting.